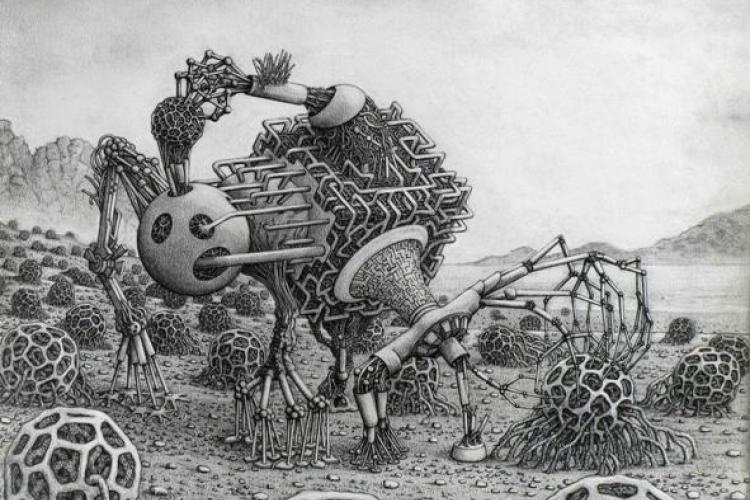 We have recently started building our own artificial framework to mimic biological evolution. In our framework, every Digital Organism (DO) has its own genome, which has been inspired by the model previously proposed by Reil (1999) and consists of a randomly created string of digits. Genes are not pre-specified, but identified in the randomly built genome. Compared to the initial model of Reil, our model makes an explicit distinction between regulatory and structural genes. Upon initialization of a new DO, specific genes will be activated, dependent on certain cues of the environment. After activation or ‘expression’ of both regulatory and structural genes, these will ‘produce’ so-called embedded ‘agents’ that together will form a Gene Regulatory Network (GRN) and exert a certain control of the DO. In our initial proof-of-concept framework, a population of DOs running an artificial GRN as their controller constitute an artificial ecosystem. Each of the DOs has the same virtual functionalities and sensors to allow them to interact with each other and to respond to the environment. In our initial simulations, energy sources (representing food for the DOs) are distributed over a grid. These food sources can ‘grow’ their energy level gradually and replicate more food with a certain rate. At every time step, DOs consume energy for living and need to constantly retrieve energy from the environment to survive. Evaluation of fitness and adaptation of the DOs swarm/population as a whole is then based on their overall energy level. The implementation of necessary functions for the DO to survive and replicate requires a certain amount of energy and high energy levels help DOs compete with others. However, higher energy levels do not always equal better adaptability of the DO. True adaptability of the DOs is dependent on both the interaction with the environment and other DOs. For example, consuming too much food at one time will lead to less food left to grow more food at later stages. Although such behaviour will increase the energy of the DOs on the short term, it will lead to extinction or harsh selection later.

Some first proof of concept of the strengths and advantages of our bio-inspired agent-based modelling has been demonstrated in our lab already for a relatively simple setup. For instance, our initial framework has proven useful to study emergent behaviour and overall enhanced adaptation in a changing environment (Yao et al., 2014, 2016). We would now like to expand and use our framework to study the effects of polyploidy in a simulated (and changing) environment. Using populations of DOs should give us the freedom to explore a wide plethora of options to investigate when and under which circumstances polyploidy or WGD can pose a selective advantage to the organism or population. For instance, based on the large amount of information that has been gained already from comparative genomics approaches using real genomes that have undergone genome-wide duplications, we can model and/or assess the effect of duplications on the structure, evolution and rewiring of GRNs. Being able to replay the ‘duplication-tape-of-life’ through hundreds or thousands of simulations, and changing different parameters such as the birth and death rates of genes, biased retention of genes subsequent to duplication events, dosage effects, etc., we will be able to study the (at least theoretical) effects of WGDs on mutational and environmental robustness. For instance, using (swarms of) DOs, we will simulate external stress conditions or the need to survive in external stress conditions by for instance the requirement that a certain gene set (pathway) needs to follow a predefined stable, though possibly complex, expression pattern. Mutations in the genome will be allowed to alter and knock out pathway genes. We will adopt different mutation rates at the coding versus the non-coding level. To test the effect of condition dependent negative epistasis (a negative interaction that becomes visible only under certain conditions or in certain tissues), we will frequently alter the conditions by imposing different selection pressures so that other pathways need to be switched on depending on the condition. We will compare evolvability and adaptive potential by the length of the evolutionary paths, i.e. time it takes in number of generations to obtain a stable endpoint, between populations in which WGDs do occur and populations in which WGDs do not occur. We will test how changing inherent biases and constraints regarding gene loss and retention will influence the resulting genetic network structures and the evolvability of certain network types and expression patterns. This will allow us to approximate the way WGDs gives rise to increased evolvability and survival on the short term and genome evolution on the longer term. Another advantage of running simulations with DOs will be to set up competition experiments between non-polyploid DOs and polyploid DOs in the same environment. By simulation of extinction events, we hope to be able to see how for instance active competition and niche occupancy might favour polyploids over non-polyploids.